This week, the 15-18th of September, AgileAssets is present at the 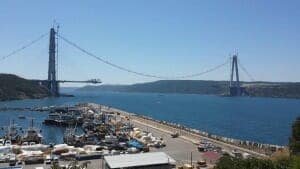 International Road Federations first combined European and Central Asian Congress. Bringing together some 20 Road Agencies and participants from more than 40 countries, the Congress is focused on professional sharing of knowledge on subjects as Private Public Partnerships, climate challenges and new technology to improve safety and reliability of roads.

In this context, AgileAssets brings to the table the latest developments in infrastructure asset management software to support every step from planning, funding, delivering and operating large projects, concessions and even national networks of roads and bridges.

The conference is situated in Turkey, which is not only a natural gateway between Europe and Asia, but also a country that is investing heavily in infrastructure build-outs. These include the 14,7 km long Ovit Tunnel – the second longest in the world, only surpassed by the Zhongnanshan in China, and the Yavuz Sultan Selim Bridge (aka the Third Bosphorus Bridge), now 10 years in construction, which will open late 2015 as a tolled bridge with cars and trains, the longest of its kind in the world.

Many of these projects, in Turkey and elsewhere in the region in countries such as Azerbaijan, Kasakhstan, Iran and Afghanistan, are PPPs and as such operated by big, often international consortia that performs operations and maintenance of a given section of the network, and sometimes even designs and builds the specific project (Design, Build, Finance, Operate).

Turkey, for instance, has 385.000 kms of roads and 8000 kms of highways. As commerce between Asia and Europe is growing and since the EU is investing in Transnational Networks for Transport, increased public and private mobility demands will bring about more construction projects in the near future. Three major PPPs are going on in Turkey right now: The Gebze-Orhangazi-Izmir motorway (6,3 BN $), the Northern Marmara Motorway (2,5 BN $) and the Sabuncubeli Tunnel Project (55 Million Project).

AgileAssets has a long established history with delivering asset management systems to departments of transportations or; national road agencies across the globe, and we have followed and responded to the needs of PPP consortia for delivering the right planning and funding schemes to the infrastructure owners and precise long term forecasts of operation and maintenance costs to investors and stakeholders. This is one of the messages that we will bring along to the IRF conference, hoping to be able to establish good contacts with new clients in the region.

Thursday, Dr. Pascal Laumet from AgileAssets will address the needs for long term infrastructure asset management and maintenance in an Executive speech on Supporting Preservation with Modern Asset Management. He will also present at a technical session Wednesday on the subject of Using a Holistic Approach to Infrastructure Maintenance.

Also Wednesday, Mr. Mikkel Bruun will present New Tools to Manage Performance-Based PPP Contracts in a applied knowledge session.  AgileAssets will also have a booth (No 5) in the exhibition. Please plan to stop by.