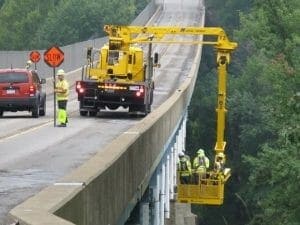 This whole activity was a complex and successful task, and GDOT were leaders by being among the first to submit their data to FHWA.

The submitted NBE file contained a full year’s data beginning in March 2014, though FHWA required only data from October 2014. Seldom do states exceed complex requirements of FHWA but the Georgia team has done it extremely well.  Thanks to GDOT’s Bob O’Daniels, Andy Doyle, and Mike Perdue who were directly involved in driving this task inside the agency.  This was no small accomplishment.  It took hard work by many DOT personnel and the AgileAssets team who deployed the AgileAssets® Bridge Inspector™ software, which went live in March 2014. Bridge Inspector is a proven, GIS-integrated bridge inspection and management system that enables agencies to record, assess, monitor and manage current and historical inspection, inventory and condition data for bridges, culverts, retaining walls and sign structures.

What is the background of this milestone?  After the failure of the Silver River Bridge in Ohio in the early 1980’s the US congress mandated inspections of all major bridges in the United States.  Most states fulfilled this mandate over the next 20 years but little or no analysis was done with the data except to identify seriously deficient bridges, a list of which is published annually by Congress.  In the MAP-21 legislation, Congress mandated that more complicated and detailed “element” data for bridge inspections be submitted in NBE files to FHWA annually.  Collection was to start no later than October 1, 2014.  Element-level bridge inspection is important because it provides more detailed information for use in making maintenance and asset management decisions than are available in the NBI.

Under MAP-21, every state is mandated to submit two types of files annually:

The effort to submit the new bridge data to FHWA carried many difficult and unique challenges.  Some of those faced for this submittal included: (1) federally mandated fast-paced changes in rules and requirements for the data and the submittal, (2) many of the rules in the element inspection manual were vague and incomplete as might be expected in this first year, (3) required changes in the inspection practices in Georgia where they implemented more complicated inspection practices by collecting data at the span level, span by span.  (4) This was a significant change for existing in-house inspectors and of course, such changes increased the risk of poor data collected and entered into the system.  Finally, it was necessary to (5) migrate and convert all the historical legacy data for past bridge inspections to the current system in preparation for the NBI submittal.  Those of you familiar with large data systems know that it is no easy task to migrate large databases from one format to another while minimizing errors.

Even in the face of these daunting challenges, GDOT was able to meet and exceed the new MAP-21 reporting requirements by leveraging the AgileAssets Bridge Inspector software.  Congratulations to the entire team and best wishes for a strong continuation and improvement of this process over the next few years.