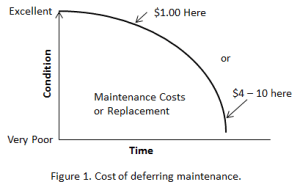 Engineers have long known that good preservation, preventive maintenance, and programmed maintenance are essential to economical pavement and bridge performance and life.  A number of people including Mike Sheflin, former Commissioner of Public Works for the Regional Municipality of Ottawa, Canada, have shown that investing $1.00 at the appropriate time in pavement maintenance can save $4 to $10 in future costs (Figure 1).  The World Bank has shown that user operating costs including time delay, fuel, tires, and other vehicle operating costs are on average 4-10 times the agencies out-of-pocket costs (Reference 1).

Most experienced pavement engineers know this to be true based on observation but we have little-quantified proof of the exact economics and therefore sometimes tend to ignore these facts.  We all know that maintenance is important:

You can think of many examples of your own.  Particularly we have seen large bridge failures in the United States in the last 10 years that resulted from failure to replace rusting load pins or failure to repair fatigue cracks in steel beams. The delay of relatively inexpensive maintenance costs early in the life of a facility are multiplied many times in failure, repair, and user costs in pavements and bridges over time.

Maintenance is an important factor in all kinds of agencies and equipment; University buildings, school buses, power generation, road paving, bridges, trucks, etc. Over the past several years David Geaslin has come up with something he calls “Geaslin’s Inverse-Square rule for Deferred Maintenance Effort.”  He published an interesting article on this subject in February 2014 (Reference 2).  Mr. Geaslin expresses this rule as follows:

When maintenance spending falls below the minimum level of funding required and the machines are operated to failure, the results will be an exponential cost increase that is INVERSE to the expected savings.

What rule could account for the dramatic increase in expenses when an asset is operated to failure?  Geaslin long ago discarded arithmetic and geometric progressions.  Then he was watching a TV program about gravity and the program talked about the force of gravity diminishing by the square of the distance.  He then remembered from his Marine Corps aviator training with nuclear weapons that the blast effect energy of a thermonuclear weapon diminishes by the square of the distance and that the chemical blast effect energy of a large bomb diminishes by the square of the distance also.  Then he recalled something his father told him, “Money is just stored energy.”  A mechanic can work all day and the energy he expends working on cars is stored up and handed to him as his paycheck.  He then takes the paycheck (stored energy) and gives it to a plumber to fix a drain or an electric company to provide electrical energy; in each case converting the money back to the energy of the plumber, which you can find easily with the use of a plumbing company search engine marketing.  He then asked himself “if money is stored energy, will that energy behave like gravitational, nuclear, and chemical energy?”  Using the data available to him from several sources he was able to show a good relationship.  He then realized that if he squared the costs of an early event he was calculating the cost that was observed when the part was not replaced or repaired early.

He began to examine many sets of data and discuss it with his clients in seminars all over the nation.  He states, “After years of examination I realize that if I started with the cost of the primary failure and initiated a succession of squared values, that each successive value represented the escalating energy state (cost) required to recover from the breakdown event at that level of failure.”  He has termed this finding the “Inverse-Square Rule.”

He has found the rule to have universal application that is not affected by the type of business, organization, or process.  He has seen the rule upheld in all kinds of operations, from university buildings to barges, jet fighters, power generation, and road paving.  Figures 2, 3, and 4 represent the data he publishes related to three situations.  Mr. Geaslin states, “I have not seen the rule to fail where an organization has been able to identify “all” the costs associated with the breakdown event.  In some cases, the clients take the total breakdown event costs and divide those by the early intervention costs that could have avoided the failure and devised the “true risk/reward ratio for deferred maintenance.”  While these examples do not directly equate to pavements and bridges, and while it is hard to calculate the total costs of road failures including user costs and time delays, it is interesting to note in Figure 5 the mirror image of the failure curve and the repair cost curve that we have calculated.

Neither Mr. Geaslin nor we at AgileAssets have conducted rigorous validation of these relationships, but they are an interesting anecdotal validation based on data from numerous agencies and maintenance activities.

It is not necessary that they be validated with great precision.  They give a very practical and believable validation of the fact that maintenance costs, when not applied early in the form of preventive maintenance, result in greatly increased costs for the highway agency and for the riding public who “own” these facilities.  Use these concepts in your own thinking related to applying preventive maintenance to pavements and bridges, vehicles, safety equipment, and other facilities in your organization.  Evaluate your own numbers as you see fit but be sure to include the user cost savings that are involved.  It will, I believe, encourage you to give early maintenance intervention more consideration, particularly in your pavements and bridges.